You've probably heard of the primordial soup, the great ocean of amino acid rich water from which the first cells allegedly arose. New evidence indicates that the primordial soup was, in fact, a plot foisted upon the world by Campbell's Soup Compa­ny to make us believe that soup was foundational to life.1 Due to a generous research grant from the Lipton Company, we now know that life really began in the primordial tea.2 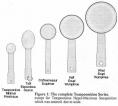 We do observe in the Coffeemeasur Ecupimus an interesting feature introduced to the anterior edge of the cranium. It is in the Coffeemeasur Ecupimus we first see a rolled anterior. It is apparent to those who have worked most closely with this re­search that the rolled anterior rim allowed these creatures to maintain facial integrity under stress. They were evidently less likely than their earlier ancestors to get bent out of shape by the stresses of life.6 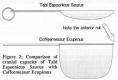 The same anterior roll seen in the Coffeemeasur Ecupimus was one of the first certain identifying marks of the next form in the Teaspoonicine series. The Whol Ecupi Wumpimus shared not only the anterior cranium roll, but the typical rounded cranium, the singular elongated appendage and the same type of distal anal perforation seen on other members of this family. The brain capacity had undergone an incredible increase in size with a remarkably small change in other ana­tomical features. Yet, it is worth noting that in the Whol Ecupi Wumpimus, one researcher noted that the single appendage was more robust than seems proportionate for the rest of the family. The robustness of this appendage is not outside the predicted range, but it does suggest divergence from the norm. Some have suggested this as evidence that the Whol Ecupi Wumpimus was more likely to have been an upright-walker. On this basis, one held that the Whol Ecupi Wumpimus was obviously closer to siring men than other forms in the Teas­poonicine group.7

When placed into the series, carefully arranged from left to right, from smaller to larger, especially from lower to higher, it is perfectly clear how evolution has progressed among the Teaspoonicines. From the Primordial Tea, to the Teaspoonicus Minimus Primitivicus, through the Tabl Espoonica Saurus, via Coffeemeasur Ecupimus, we are able to see with our eyes the remarkable transformation through which the Whol Ecupi Wumpimus came into existence. In spite of this overwhelming evidence, however, some fundamental creationists insisted that if we were to honestly hold to this model of Teaspoonicine ori­gin and development, we needed to produce a transitional form which would better link the Coffeemeasur Ecupimus and the Whol Ecupi Wumpimus.8 Their objection was that the in­crease in brain capacity between these two forms was entirely too great to be accounted for merely on the basis of natural selection and mutation.

We went back to our benefactors at Lipton and reported the challenge to the integrity of our research (and the implicit threat to the Primordial Tea hypothesis). They generously sup­plied an additional $250,000.00 in scientific advancement grants in order to squash the objections perpetrated by those who know nothing of Teaspoonicine morphology.

As is usually the case, science won out!9 In an obscure cache of Meso-Teaspoonicines found jumbled in a square wooden cuisinary burial crypt, we discovered the Half Ecupi Wumpimus. The Half Ecupi Wumpimus was obviously the perfect transi­tional example linking the Coffeemeasur Ecupimus to its more modern descendant, the Whol Ecupi Wumpimus. With the completion of this uniform series, it becomes clear to all men of intelligence that the Teaspoonicus Minimus Primitivicus is most certainly the earliest ancestor of the well known, modern Teaspoonicus Hyper-Maximus Saucepanicus! 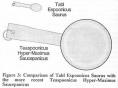 Professor Kailer welcomes your correspondence at:

All comments are welcome, but critical papers will be enter­tained only from those with accredited qualifications in Teaspoonicine Morphology. (Non-degreed laymen have no business challenging the work of experts!) 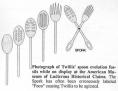 While the preceding report by Professor Kailer contains much valuable research which will undoubtedly be quite new to many people, in the early eighties we reported significant re­search by Dr. R. Holtus of Sandy Labs, NM, showing that ob­jects formerly believed to have been created had in fact evolved. Holtus' research led him to conclude that chains had evolved from volcanic eruptions in beds of iron ore. He was able to show many evolutionary twists during the early devel­opment of the chain, and even found some missing links (and more than a few weak ones).

Holtus' research was plagiarized ... er... followed closely, by some amazing work by Professor Twillis of Patch O'Berry, Missouri who was able to demonstrate that spoons had clearly evolved into forks by discovering that holes in primitive spoons had eventually elongated, then turned parallel to the elongated appendage, probably eventually opening on the end to produce a fork. As with other great research in evolution Twillis' research was derided by fundamentalists of the reli­gious right until he silenced them with the discovery of a com­plete transitional form, the now famous Spork.

Kailer is the first to claim evidence for teaspoon ancestry of humans. While his evidence is very cogent, as mentioned in his footnotes, some remain skeptical. One of those skeptics Kailer did not mention was Holtus who felt he had clear evi­dence for chain ancestry of hominids. Lest we forget the pow­er of Holtus' evidence, we remind the reader that it included both Oriental and African branches showing definite hominid features.

Also, in this journal, Twillis (1989) produced cogent evidence that man had evolved from the sand dollar via wheeled ve­hicles. (See below) Twillis did not commit on the origin of the Sand Dollar, but privately he has expressed preference for a soup of molten silica dioxide.

Creationists will undoubtedly twist these minor disputes out of proportion, and will misquote and quote out-of-context these brilliant scientists, even going to the ludicrous extreme of try­ing to claim that these differences indicate weakness in evolu­tionary theory. But, the informed reader will recognize that science is a self-correcting process and that these minor dis­putes, rather than displaying any weakness in evolution theory, merely demonstrate the validity of the scientific process and the universality of acceptance of the basic doctrines of evolu­tion among all true scientists. 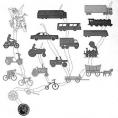 1 Campbell's Soup Company, in a recent advertising campaign, is clearly attempting to reinforce the popular belief in the ability of primordial soup to be the source of the emergence of life. Their ad slogan is "Never Underestimate the Power of Soup."

2 Origin of life researchers did an extensive model of the action of solar energy on a prebiotic soup mixture. Taking billions of gallons of beef stew, containing lots of both animal and mineral proteins, gently stirring it in the sunlight for billions of years, you will have an awesome lot of rot­ten beef stew. This constitutes a very strong, though indirect, evidence for the primordial tea hypothesis.

3 English theoreticians seemed disposed to ascribe primal ascendency to another form often found in laboratory models of primordial tea. The Pekoe Blackii Bagus certainly seems to form in virtually every laboratory simulation of tea. However, chemical homological studies invalidate any conjecture that the Pekoe Blackii Bagus could be even remotely related to the Teaspoonicus Minimus Primitivicus. One well-known lecturer on Teaspoonicine Morphology, Kenny Hammer from Australia, reports that some of the Australian investigators briefly considered the Earr Legrey Bagus seen in some experimental tea tanks as an early ancestor of Teaspoonicines. But the Earr Legrey Bagus fell to the same fate as the Pekoe Blackii Bagus.

4 The principal work in the field of teaspoonicine morphology has been done near Oz, Kansas. Remarkably parallel work, worthy of note by all serious teaspoonicine morphologists, comes from Patch O'Berry, Missouri. Evidently, teaspoonicines closer to the Mississippi tend to have slightly more oblong craniums than the western population. Even though the roundness of the western forms is considered to be more common, the elonga­tion of the eastern forms does not justify a different taxonomic classification.

6 A leading Teaspoonicine Forensic Psychologist, Dr. Paul Ackerspoon, postulates that Meso-teaspoonicines reflected numerous anthropomorphic traits including, but not limited to, stress responses such as brow furrows resulting from deep-seated concerns over existential issues and the final state of the departed. True fulfillment for the Teaspoonicines was very temporary. Many seemed to suffer feelings of emptiness for extended periods.

7 An unconfirmed account from Disneyland indicates that Dr. Don Joe Hansen has expressed skepticism regarding the incipient hominid struc­ture seen in the hypertrophied appendage of the post-meso-teaspoonicine Whol Ecupi Wumpimus. But we all know Don Jo Hansen's near pathological bias toward apes and soup, so it is expected that evidence related to spoons and tea would be difficult for him to swallow. Nevertheless, the world waits anxiously his definitive response soon to appear in Lost Continent Geographic Magazine. Dr. Twillis of Missouri assures this author that an endorsement by Don Joe Hansen would virtually guarantee universal acceptance of the Teaspoonicine ancestry of certain groups of homi­nids. Such a development could not be ignored by any responsible Evolutionary Morphologist. It would certainly influence any future work in an­thropological ontogeny and phylogeny.

8 The interference of fundamentalist creationists to the advancement of true science, such as this work, has been well documented by numerous experts in many fields. Biblical creationists have totally discredited themselves by their own claims. No one can profess intellectual integrity and deny the obvious, concrete evidence we scientists hold in our own hands for Teaspoonicine Ontogenesis and Teaspoonicine Phylogenetic progress.

9 Dr. Hug eRoss, normally a defender of true science, is also reportedly unimpressed by the evidence for teaspoonicine human ancestry. He claims to have solved a revised mirror image of the equations of the General Theory of Relativity to demonstrate conclusively that teaspoons ex­panded rapidly in a flat time warp from BB's, whereupon God intervened with a minor miracle to produce Coffeemeasure Ecupinius. Those who foolishly expect evidence to support his claims apparently must await repair of his mirror which was damaged while solving some new equations upside down in the shower. However, eRoss did say that he had solved Einstein's equations backwards using triple mirrors, which led unequivo­cally a rapid expansion of the primordial tea. Thus, while expressing reservations about teasponicine human ancestry, eRoss remained true to his mission in life, clearly showing that any enlightened scientist will quickly reject any view based on the silly notion that God expressed himself clearly on origins in the Bible, in favor of more scientific models.